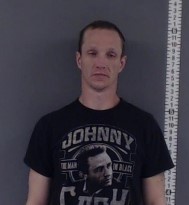 A late-night, rural patrol and traffic stop ended with the arrest of four individuals on various charges.

On November 25th, at approximately 10:27 PM, Trooper Kyle Taylor was patrolling on county roads in rural Washington County in the area of Little York.  Trooper Taylor initiated a traffic stop on a purple 1997 Chevrolet Camaro for a stop sign violation. During the stop, the driver was found to be driving on a suspended driver's license, and Trooper Taylor continued the investigation, requesting the assistance of Deputy Paul Ginkins and his K9 partner, Lenny.

As a result of the continued investigation, approximately 3 grams of heroin was located in the vehicle, along with several hypodermic needles and drug paraphernalia.

The following were arrested:

Daniel Abner, 34, Madison, IN: Driving While Suspended Prior - C Misdemeanor