ALL INFORMATION BELOW IS COURTESY OF WIKI'S LARRY DUKE:

Two weeks down three to go in the KHSAA 2A District 5 football race.

Standings after the first two weeks

This Friday Walton-Verona is at Owen Co

And our Football Friday broadcast on 95.3 WIKI has Carroll Co at Trimble County

Larry and Rob will keep you up to date on all the District 5 contest on Friday Night during our broadcast on 95.3WIKI and online at www.953wiki.com

LOUISVILLE, Ky. – The Hanover men's cross country team hit the road for the Louisville Classic competing in the 8k race on Saturday afternoon.
Leading the Panthers across the finish line was junior Ethan Weston (Louisville, Ky.) in 18th place in the 412-runner field in a time of 25:57.7.
Teammate, freshman Connor Watson (Greenwood, Ind.), finished the race in a time of 29:04.3 landing 264th while sophomore Owen Via (Pleasant Hill, Ohio) turned in a 267th place mark in a time 29:05.5.Senior Robert Hoegeman (Monroe, Ohio) turned in a time of 29:14.3 followed by sophomore RJ Thalls (Richmond, Ind.)  in a time of 31:16.7.Hanover returns to action on Friday, October 14 when they compete at the Jenna Strong Classic hosted by Wilmington.

DEFIANCE, Ohio – The Hanover Panthers (1-3 overall, 1-0 HCAC) hit the road for Heartland Collegiate Athletic Conference action on Saturday afternoon using a second half outburst to capture the 37-20 victory. Leading the charge was sophomore Austin Oppel (Brandenburg, Ky.) with 119 yards on the ground and a touchdown. Senior Matthew Weimer (Georgetown, Ind.) picked up 257 yards through the air with two touchdowns and a rushing score.After surrendering the opening score to the Yellow Jackets, the Panthers responded. Sophomore Blake Huffman (Columbus, Ind.) provided the score early in the second quarter using a one yard rush at the 8:51 mark. Hanover took the ball 81 yards on 13 plays for the touchdown, 7-7. However, Defiance responded reclaiming the lead midway through the second quarter after a five play 67 yard drive ended in another Yellow Jacket score, 14-7. Trailing 14-7, the Panther defense went to work forcing a fumble late in the opening half that set Hanover inside the Defiance 35 yard line. Weimer handled the rest knotting the contest at 14-14. The Blue and Red erupted in the second half taking the kickoff 65 yards on six plays resulting in an 18 yard hookup with junior Eric Roudebush (New Palestine, Ind.), 21-14. The third quarter would see sophomore Yoann Kinanga (Jeffersonville, Ind.) cap off the scoring as he connected for a 22 yard field goal. The scoring frenzy continued in the fourth quarter with sophomore Jalen Peck (Bloomington, Ind.) making his way into the endzone after a 15 yard connection with 8:42 to play. The final touchdown came on the ground by way of Oppel en route to the 37-20 victory. Hanover returns to action on Saturday, Oct. 8 when they celebrate Homecoming with Bluffton at Alumni Stadium. Kickoff is set for 1:30 PM. 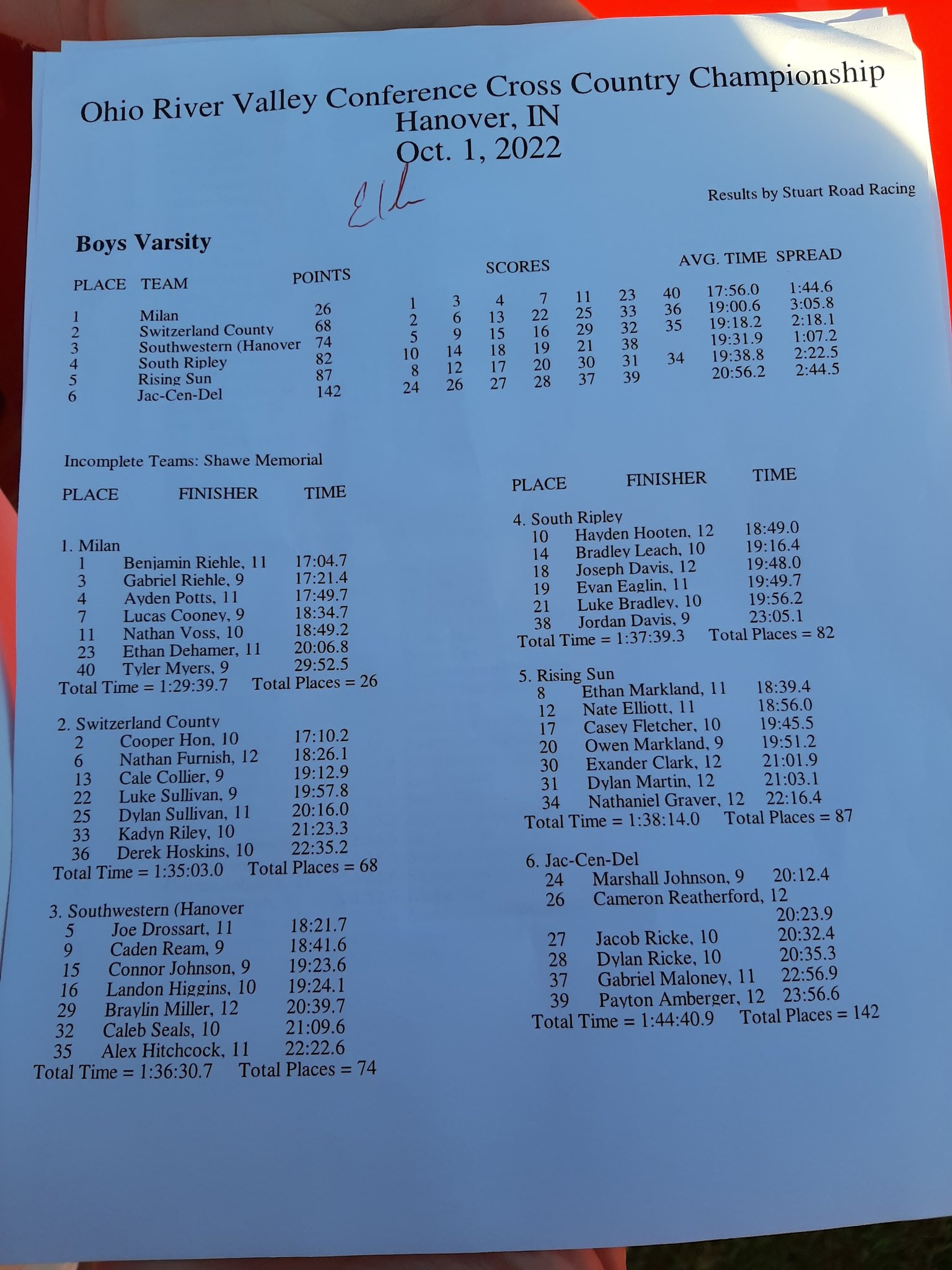 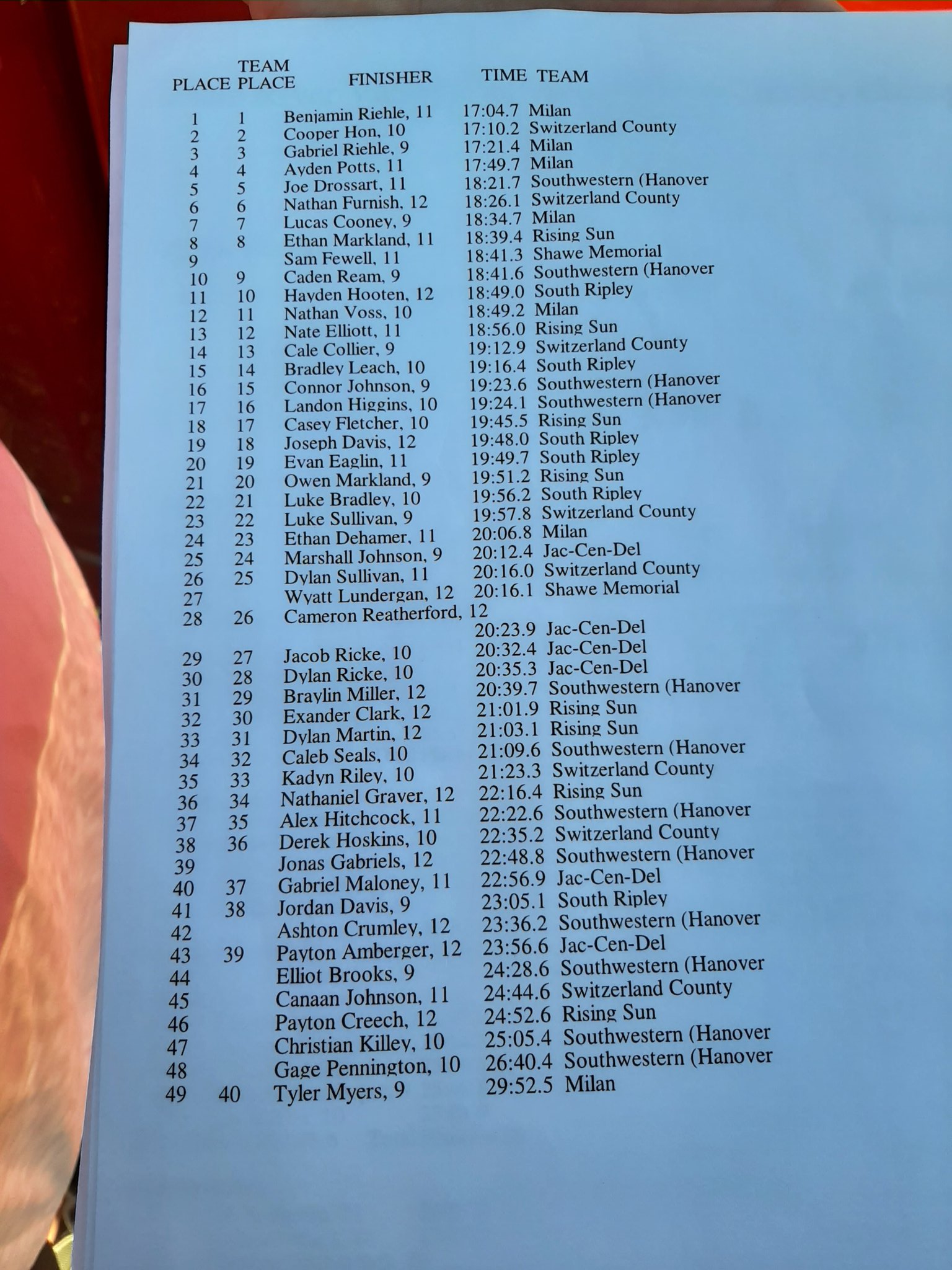 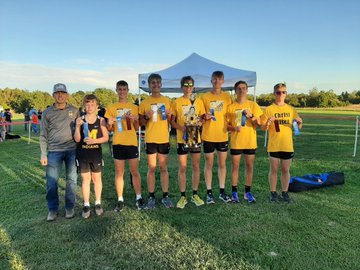 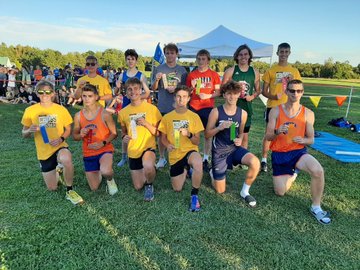 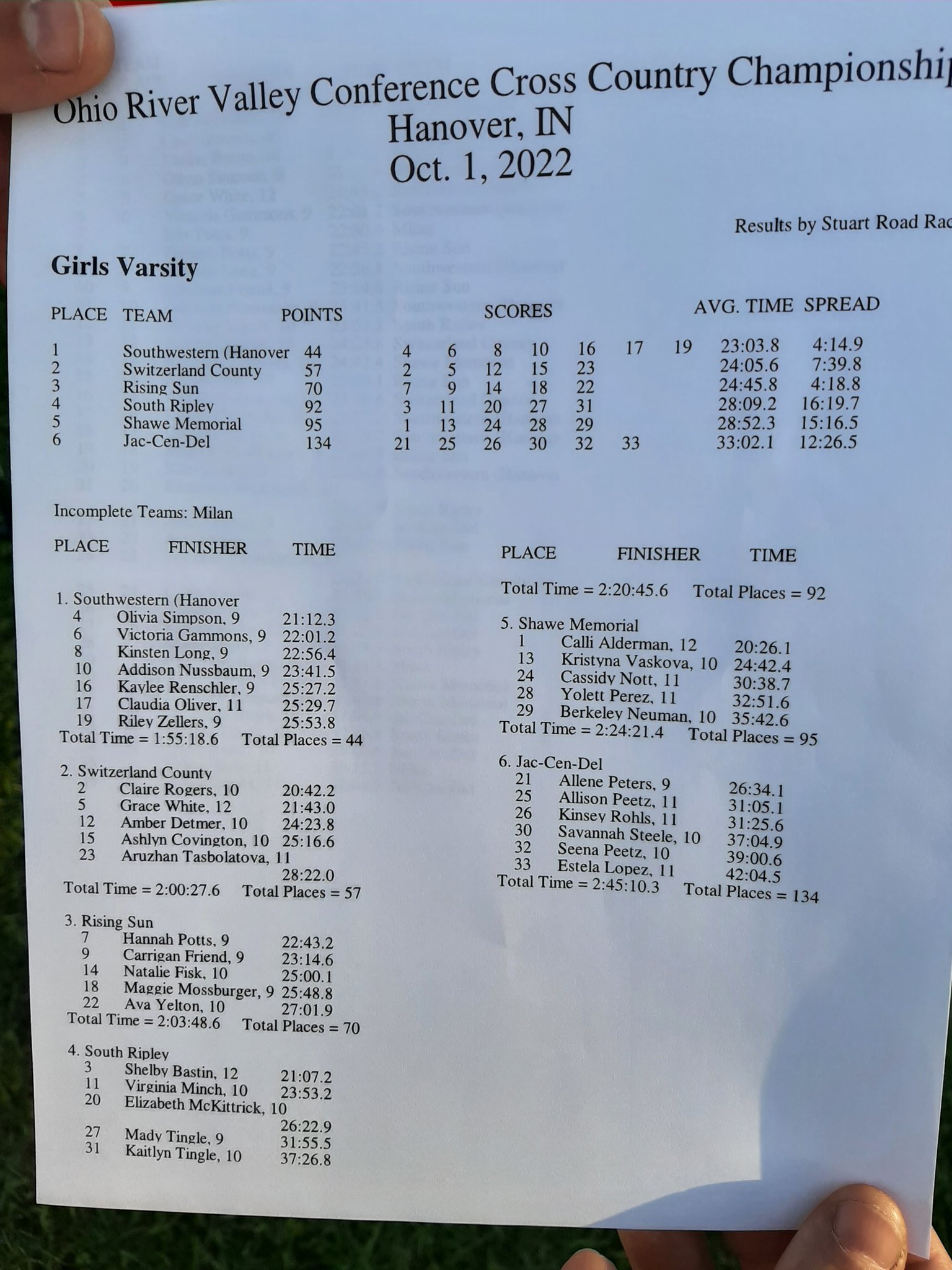 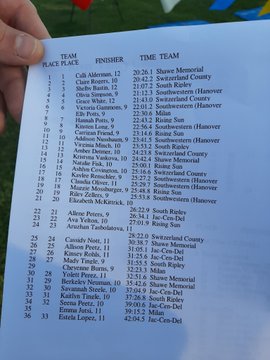 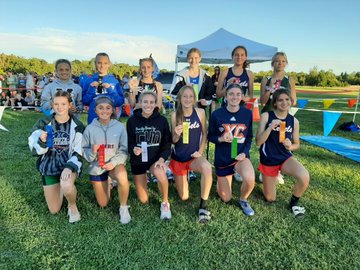 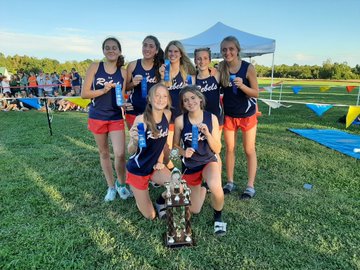 Shawe Volleyball squad hosted two matches over the weekend with Senior Night on Friday night VS Crothersville and a varsity only match on Saturday hosting Jennings County!

On Friday, the Lady Hilltoppers defeated Crothersville in 3 sets by scores of 25-11, 25-9, 25-16. Shawe's four volleyball seniors were also honored. They are Autumn Lathrem, Emmaline Leatherman, Peyton Lock, and Lauren Grote!

The Lady Hilltopper volleyball squad is now 17-7 on the season, 4-1 in the ORVC.

Congratulations to our Boys' Soccer Team for their 3-1 win over Gallatin County in the first round of the 31st District Tournament. The Panthers will play at 8 pm in the finals on Monday!

Congratulations to our Lady Panther Soccer team for their 10-0 win over Owen County! The Lady Panthers will play in the finals at 6pm on Monday at Panther Field!

HARRISON, Ohio – The Hanover men's golf team hit the road for the Stateline Shootout finishing seventh in the nine team field.
Leading the charge for the Panthers was senior Dawson Long (Paoli, Ind.) landing tied for second with 151 (74-77) strokes.
Junior Griffen Reynolds (Lanesville, Ind.) carded a 163 (80-83) finishing tied for 28th overall while teammate sophomore Bing Wilson (Muncie, Ind.) took 31st with 164 (85-79) strokes.
Rounding out the field for the Panthers was freshman Alex Wright (Charlestown, Ind.) finishing tied for 41st with 173 strokes and junior Chandler Cole (Madison, Ind.) placing 45th with 175 (87-89) strokes.
The Panthers returns to action on Monday, Oct. 31 and Tuesday, Nov. 1 when they compete at the O'Brient Jensen.

HANOVER, Ind. – The Panthers picked up a sweep of Franklin on Sunday afternoon winning 9-0.
In doubles action, junior Melaina Tippery (Loogootee, Ind.) and junior Isabelle Roberts (Brownsburg, Ind.) won at no. 1 doubles 8-7 before the team of junior Rachel Pinnick (Franklin, Ind.) and sophomore Lauren Hale (Crawfordsville, Ind.) claimed no. 2 doubles 8-4.
Rounding out doubles play for the Blue and Red was the team of sophomore Lyla Waskom (Scottsburg, Ind.) and freshman Hailey Vandeventer (Bloomington, Ind.) winning 8-5.
The momentum carried into singles action as Tippery won her match at no 1 single, 7-5, 6-3.
Hanover also competed to a win at no. 2 singles 6-3, 6-3 before Roberts won her match 6-3, 6-2.
Waskom picked up her singles match 4-6, 6-2 (10-7).
Hale completed the 9-0 sweep winning 6-4, 6-7 (10-6) at no. 6 singles.

After surrendering the first set, the Panthers surged ahead early in set two as a three point rally pushed HC out front. However, Manchester battled back before a junior Casey Dunn (Fort Thomas, Ky.) service ace sealed the set tying victory.

Set three, saw the Spartans capture the early advantage when freshman Elliot Mays (Jeffersonville, Ind.) landed a kill that sparked a HC four-point rally. The rest was history as Hanover rattled off another five point surge to claim the 2-1 set lead.

The final set once again opened as a back and forth affair when a five point outburst gave HC a significant lead. With Dunn behind the service line, Hanover was able to land the final four points for the HCAC victory.

The Blue and Red return to action on Wednesday, Oct. 5 when they travel to Earlham for HCAC action. First serve is set for 7:00 PM.
Men's Soccer controls play in draw at Manchester

Leading the way for the Blue and Red was the defense surrendering just two shots to the host Manchester Spartans.

The first half saw the two team's play to a scoreless tie as Hanover charted four shots, two of which landed on frame. The Panther defense surrendered zero corner kicks and gave the Spartans no looks at goal.

The second half saw the scoreless battle ensue as neither team would give an edge. With time winding down, freshman Alex Farias (Louisville, Ky.) looked to break into the scores column as he fired a shot that was denied by the Spartan keeper.

In the 83rd minute junior Xander Ochsner (Floyds Knobs, Ind.) got a strong look at frame but once again the Blue and Red came up empty handed.

Hanover returns to action on Wednesday, Oct. 5 when they welcome Transylvania. Game time is set for 3:30 PM.

Sophomore Beth Cook (Goshen, Ohio) paced the attack recording her third hat trick of the season and fifth straight game with a goal. Five other Panthers recorded goals in the contest.

Junior Cassidy Lett (Walton, Ky.) dealt the first blow for the Blue and Red as she beat the Spartan defense in the fifth minute, 1-0.

The Panthers continued on the attack as Cook played a ball from freshman Kenna Patterson (Bloomington, Ind.) extending the Hanover difference to 2-0 at the 14 minute mark.

HC entered the break with the 3-0 advantage after a Manchester mishap resulted in a Panther strike.

Hanover pelted 18 first half shots, 11 of which landed on frame.

The second half saw an assault on frame as junior Callen Johnson (Ashland, Ky.) made her ways into the score's column with a blow in the 47th minute before Cook completed her second straight hat trick with back-to-back goals.

HC returns to action on Wednesday, Oct. 5 traveling to Transylvania. Game time is set for 7:00 PM.