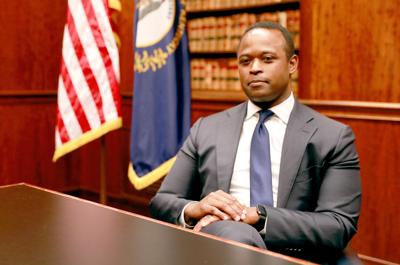 FRANKFORT, Ky. (KT) – Although Kentucky’s 2022 primary election takes place next week, there is already a lot of buzz for the 2023 governor’s race with at least three Republicans, and probably more, seeking to stop Democrat Andy Beshear’s reelection bid.

The latest to join what is becoming a crowded field for the GOP gubernatorial nomination is Attorney General Daniel Cameron, who filed his intentions with the Kentucky Registry of Election Finance on Wednesday.

In his Registry filing, his wife, Makenze Cameron, is listed as the campaign treasurer.

“I’ve decided to run for governor because Kentucky needs a leader who reflects the values of the men, women and children of all 120 counties,” said Cameron. “That’s not our current governor.

“If you attend church or own a small business, you should know your governor won’t target you and shut you down. You should expect a Governor who will stand up for life. And if you’re in law enforcement you deserve a Governor who won’t abandon you for political gain. As your Attorney General I’ve proven that I will always defend Kentucky’s values.”

Due to changes made by the General Assembly in 2020, Cameron is not required to name a running mate for lieutenant governor, unless he wins his party’s nomination in the May 2023 Primary Election.  Once the certificate of nomination is issued, the nominee would have until the second Tuesday in August 2023 to make the designation with the Secretary of State’s office.

Other Republicans who have filed their intent to run for governor with the registry include current Commissioner of Agriculture Ryan Quarles, who sent his paperwork in on May 1, and Auditor of Public Accounts Mike Harmon, who filed his intent on July 12, 2021.  Both are term-limited in their current office.

“The Republican Primary for governor is getting more crowded for one reason - Andy Beshear has taken Kentucky down the wrong path," Harmon said. "Beshear closed our businesses, closed our churches, kept abortion clinics open, and has fallen in line with Joe Biden’s radical liberal agenda.

"I want to welcome my friend Daniel Cameron to the race. Daniel has an important voice in the Republican Party, and I look forward to seeing him on the campaign trail and discussing our ideas for how best to get Kentucky back on track.”

Beshear filed his intent to run for re-election, October 1, 2021.

The potential vacancy in the attorney general’s office already has at least one current officeholder taking a look at that post.

Republican Secretary of State Michael G. Adams, in a post on Twitter, congratulated Cameron on his filing, saying he joins an excellent field of Harmon, Quarles, and presumably others.

In a peek at his possible future plans, Adams added, “I will now consider running for Attorney General, and also consider pursuing reelection.”

If he wins the governor’s race, Cameron, who is Kentucky’s first Black attorney general, would also be the first Black governor.

The first day that statewide candidates can officially file for the 2023 election with the Secretary of State’s office is Nov. 9, 2022, the day after this year’s General Election.