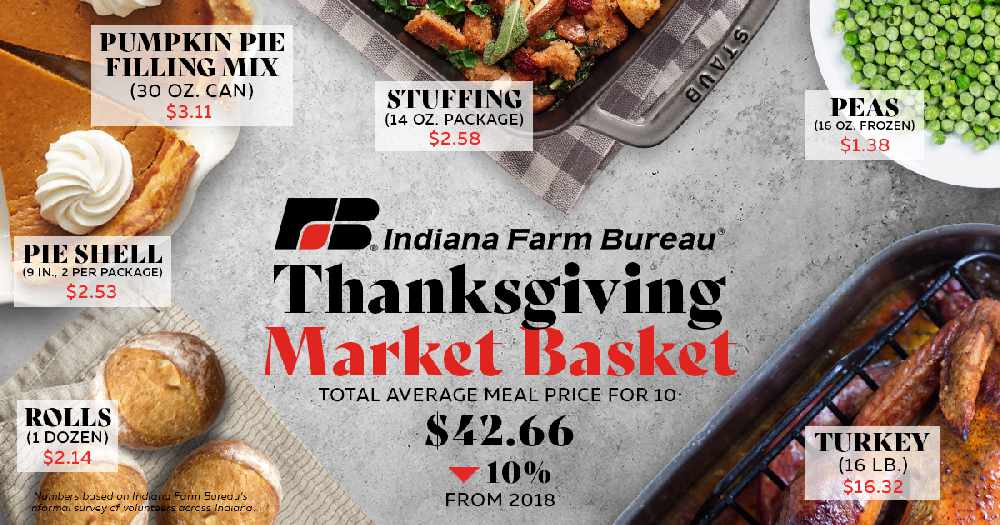 Results from Indiana Farm Bureau’s annual Thanksgiving market basket survey show Hoosier shoppers can expect to spend approximately 10% less at the grocery store this Thanksgiving. According to this year’s pricing survey, the average cost for a Thanksgiving dinner for 10 this year, including 12 traditional food items, is $42.66 or $4.26 per person, which is approximately 10 percent cheaper than in 2018.

The INFB Thanksgiving market basket survey was conducted by volunteer shoppers across the state who collected prices on specific food items from one of their local grocery stores. Volunteer shoppers are asked to look for the best possible prices, without taking advantage of special promotional coupons or purchase deals.

According to AFBF’s director of market intelligence Dr. John Newton, turkey wholesale prices are up significantly this year, so the decrease in consumer turkey prices can be attributed to competition between retailers in an effort to draw customers to their store for the upcoming holiday.

“If you’re headed to the store soon to get your Thanksgiving turkey, you can expect to see very affordable prices this year on a high-quality product,” said Isabella Chism, INFB’s second vice president and chair of the Women’s Leadership Committee. “Many people don’t realize that Indiana ranks fourth in the nation for turkey production, so we have many local farmers to thank for our holiday meal this year. Turkeys also consume a significant amount of soybean meal, a top Hoosier farm commodity, so they’re great for our state’s economy.”

Other traditional Thanksgiving items that Hoosier shoppers can expect to be a bit more affordable this year include cube stuffing, pumpkin pie fulling and frozen peas. Items that may be a bit more expensive this year include sweet potatoes, rolls, fresh carrots and celery and fresh cranberries. All other items, including milk, pie shells and whipping cream remain relatively unchanged.

To capture the diversity in Thanksgiving meals across the U.S., INFB also collected prices for other frequently served Thanksgiving items and found that consumers can expect to pay $9.70 for a 4-pound ham (compared to $9 in 2018) and $2.73 for a 5-pound bag of russet potatoes (compared to $2.80 in 2018).

Indiana’s survey is completed in conjunction with a national survey administered by the American Farm Bureau Federation. AFBF found that the national meal average for 10 people is $48.91 which is approximately 13% more than Indiana’s average meal price this year. Nationally, a total of 141 volunteer shoppers in 39 states participated this year.

Shoppers with an eye for bargains in all areas of the country should be able to purchase individual menu items at prices comparable to the Farm Bureau survey averages. INFB and AFBF’s 2019 Thanksgiving market basket prices track closely with the government’s Consumer Price Index for food eaten at home.