FRANKLIN, Ind. – The Hanover College football team is once again on top of the Heartland Collegiate Athletic Conference, as the Panthers defeated Franklin, on the road, in the 88th annual Victory Bell Classic Saturday afternoon, 23-20. 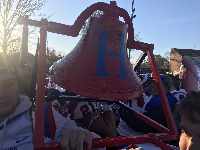 With the win, the Panthers (7-3, 7-1 HCAC) earned a three-way share of the HCAC championship with Franklin and Mt. St. Joseph. Hanover though, earned the tiebreaker for the conference's automatic national playoff spot due to regional strength of schedule. The Blue and Red will be making their first national playoff appearance since 2003, while also earning their first Bell-Game victory since 2004.

Hanover's defense forced one of the nation's best offenses into five turnovers, as well as two turnovers on down. The Grizzlies (8-2, 7-1 HCAC), who came in averaging over 45 points per game, were held to a season low. The Blue and Red also held FC to 200 yards fewer than its season average of 650-plus yards per contest.

Franklin jumped out to an early lead, scoring a touchdown on the first possession of the game. Hanover was driving on its opening possession before a red zone turnover gave the ball back to the Grizzlies.

After picking off their own pass in the red zone, the Panthers were then able to drive down the field for their first score. Junior AJ Breit (Louisville, Ky.) completed a 14-yard pass to classmate Jackson Daugherty (Greenwood, Ind.), who found the end zone, tying the game at 7-7 with 4:51 left in the first quarter.

Breit finished with 26 completions on 41 attempts for 274 yards and three total touchdowns. Leading the receiving game was junior Conner Gibson (Lexington, Ky.), who hauled in a career-high seven receptions for 97 yards. Sophomore Jared Frank (Louisville, Ky.) tied for the team-high with seven catches.

Neither side was able to score again in the first half, leaving the game in a 7-7 stalemate at the intermission. Hanover forced three first half turnovers by the Grizzlies and added the two stops on fourth down as well.

Just as they did in the first half, the Grizzlies were first to strike in the second half, going up 14-7 with 9:42 showing on the third period clock. Hanover though, rallied and converted on two fourth down plays, including fourth and goal on the one to tie the game at 14-14. Breit took a quarterback sneak into the end zone with less than four minutes remaining in the third quarter.

The Panthers gained possession to start the fourth and final frame and a 27-yard field goal from sophomore Austin Steurer (Warsaw, Ky.) put HC in front for the first time, 17-14, with 13:09 left to play. Steurer's field goal capped a nine-play, 43-yard drive, which featured six completions by Breit for 36 yards.

Franklin responded on the next possession with a touchdown of their own to take a 20-17 advantage with 8:41 remaining. The Grizzlies' point-after try fell victim to a bad snap and a failed conversion.

On Hanover's next offensive drive, the team was faced with a fourth and two at the FC 48-yard line. The Panthers though, saw Breit go over the top to hit junior Taylor Bleistein (Wesley Chapel, Fla.) in stride for a touchdown. The Blue and Red led 23-20 with 3:47 remaining.

Franklin began its next drive by completing two of three passes to get the ball near midfield. On the fourth play though, Dauer forced and recovered a fumble on a quarterback scramble to secure Hanover possession.

The Panthers garnered two first downs before taking a knee and celebrating with the Bell. Coach Matt Theobald recorded his first head coaching win in the rivalry. Theobald is now 9-3 as an assistant coach, head coach or player in Bell Games at Hanover.