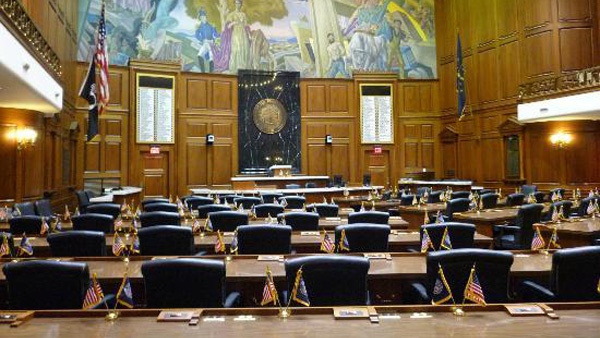 INDIANAPOLIS – Indiana lawmakers are moving forward with a bill that would require public comment to be allowed at school board meetings. House Bill 1130 unanimously passed the House government and regulatory reform committee Wednesday morning. It now heads to the House floor.

The proposal comes after some districts chose to temporarily suspend public comment periods in the wake of contentious school board meetings. Among them – Carmel Clay Schools, which declined our request for comment on this story. The Indiana Association of Public School Superintendents supports the bill, said Robert Taylor, associate director.

“The author did a nice job of reinforcing the need to have civil discourse and for meetings to be conducted in an orderly fashion,” Taylor said.

The bill would require school boards to accept oral public comment at each meeting, allowing no less than three minutes per person. That would require some districts to change their current policies. For example, Franklin Community Schools provides two minutes per speaker.

“There’s always a place for public comments,” said David Clendening, superintendent of Franklin Community Schools. Clendening said he supports the bill but believes there are some rare situations when the school boards should be allowed to suspend public comment temporarily. “If you see that tension rising, and you’ve got different factions going back and forth, and you’re really not getting anywhere to help solve the concern,” he said.

The bill does allow school boards to take steps it deems necessary to maintain order at meetings, such as removing anyone intentionally being disruptive. Other school officials say they prefer more local control.

“I do believe public school corporations should be responsive to their community,” Harold Olin, superintendent of Greenfield-Central Community School Corporation, said in a statement. “Being responsive includes providing opportunities for input from all constituents; students, parents and school staff. That being said, I believe each school corporation’s local governing body should be able to establish their own protocols for receiving such input.”

The Indiana School Boards Association supports the bill, said executive director Terry Spradlin. “ISBA embraces parent involvement and community engagement with our school corporations and school boards, and we advocate for good governance and public transparency,” Spradlin said in a statement. “This bill meets these principles.”