This incident occurred on Saturday 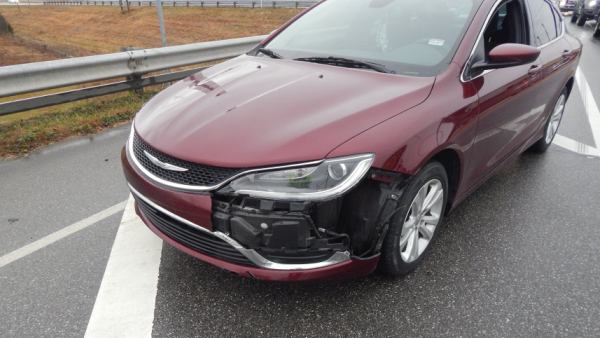 Shortly after noon on Saturday, Trooper Spencer observed a north-bound Chrysler 200 passenger car on I-65 just south of the Scottsburg exit after receiving 911 reports of a vehicle matching that description driving recklessly. Trooper Spencer observed the car straddling the center line and saw a string of other cars backed up behind the Chrysler, unable to pass. Sergeant Spencer attempted to stop the vehicle after it exited onto the Scottsburg ramp, and the car stopped in the middle of State Road 56 even though the traffic light was green. After eventually pulling to the side of the highway, the driver then began to back up towards Spencer, forcing him to back up to avoid being struck.

During the traffic stop and subsequent DUI investigation, Sergeant Spencer also learned that a vehicle matching Chrysler's description was involved in a hit-and-run crash near Henryville just prior to his traffic stop. The Clark County Sheriff's Department later handled that investigation.

As a result of the DUI investigation, the driver, Kayla Ann Akin, 27, of Fishers, was transported to Scott Memorial Hospital for a blood draw. Akin's Blood Alcohol Content was .405, over five times the legal limit.

After being cleared by medical staff, Kayla Akin was transported to the Scott County Jail and was charged with Operating While Intoxicated (OWI) - Impairment, OWI with BAC over .15 percent, and Reckless Driving; all Class A Misdemeanors. Akin was also cited for Open Container.