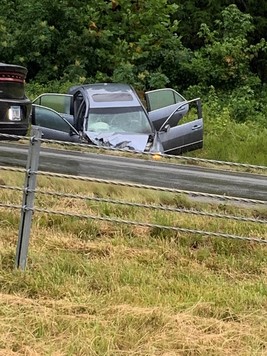 Stolen out of Illinois

The pursuit of a stolen vehicle crossed county lines and ended in a crash involving two other vehicles sending two to the hospital with possible serious injuries.

At approximately 4:51 p.m., on Monday, July 29th, the Indiana State Police (ISP) received a call from a motorist advising a blue Honda Accord that was speeding on I-65 southbound and was weaving from lane to lane.   A check of the vehicle's license plate revealed the car was stolen out of Illinois.

A Crothersville Police Department Officer later located and attempted to stop the car near the 40 mile-marker.  When the vehicle failed to stop, the officer began pursuit.  Indiana State Troopers and Jackson County Deputies soon joined to assist as the pursued vehicle reached speeds near 140 miles-per-hour.

The pursuit continued southbound on I-65 and into Scott County and attempts to use Stop-Sticks were unsuccessful.  The car eventually collided with a semitractor-trailer and a 2019 Infiniti, then came to rest on the west side of the interstate near the 31 mile-marker.

Two occupants fled the scene on foot but were soon apprehended.  The third occupant of the vehicle required extrication and was rushed to the University of Louisville (UofL) Hospital with serious injuries.  All three occupants of the car were juveniles from Illinois.  The two juveniles who fled were treated for minor injuries and transported to the Clark County Youth Detention Center.

I-65 remained closed until approximately 10 p.m. while ISP Reconstructionists investigated the collision and workers cleaned the scene of spilled diesel fuel.