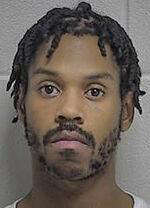 Through out the course of the traffic stop the operator was identified as Alex Foster, a 29 year old male of Louisville Kentucky.  It was also determined that Foster had two(2) active warrants through Jefferson County.  One of the warrants included the charges of Murder as well as Possession of a Handgun by Convicted Felon.

In addition to the pre existing charges from the active warrants Foster was charged with the following new offenses: Speeding 15 MPH Over the Limit,  No Registration Plates, Theft of Identity of Another Without Consent, Operating Motor Vehicle Under the Influence of Alcohol/Substances, Failure to Wear Seat Belts, and Operating on Suspended or Revoked Operator License.  Foster was arrested and lodged at the Oldham County Detention Center.

The ongoing investigation is being conducted by Kentucky State Police Post 5.