Standing room only crowd on hand

Southwestern and Madison split the Thanksgiving Eve Turkey Shootout on Wednesday night in front of around 4,000 fans at the Delbert O. King Gym at Southwestern.

Madison won the girls contest 64-40 ending Southwestern's 5 game winning streak. It was the 9th straight Turkey Shootout win for the Lady Cubs who were led in scoring by Jade Nutley with 22 and Lunden Perry with 14. The Lady Rebels were led by Ellie Foley with 12 points.

Madison is off till Wednesday, December 4th at Floyd Central and Southwestern is back at home against Shawe on Friday, December 6th.

In the boys contest it saw the game tied 12 different times before Southwestern went on a tear in the 4th to pull away with a 75-61 victory over Madison. Forster Mefford led the Rebels with 26 points and Matt Williams had 23. Mason Welsh led the Cubs with 21points. 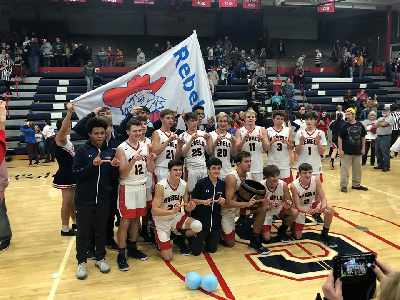 Southwestern will play in the Loogootee Tournament on Saturday against Rock Creek at noon then either Loogootee or Clarksville. Madison will be at Trinity Lutheran on Saturday.