Reckless Driving and Pursuit Lead to OWI and Drug Arrest 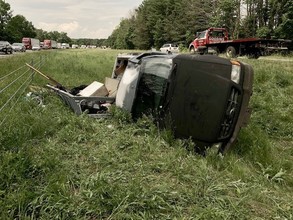 A driver reported for his reckless and dangerous driving is behind bars in Scott County after leading officers through two counties and crashing just north of Austin.

On Thursday, June 6, 2019, just before 2 p.m., the State Police in Sellersburg received 911 phone calls about a pickup truck driving recklessly on I-65 northbound near Jeffersonville. Callers advised that the driver and passenger of a small black pickup with a silver camper shell were not only driving aggressively but were also hanging out the window and making obscene gestures towards other drivers.  Trooper James Ferguson was northbound near the five mile-marker and observed the vehicle making lane changes without signaling; however, Trooper Ferguson was in a state-owned car without lights or siren and was not in uniform.

Trooper Ferguson continued to observe the truck as it sped away.  The driver made several reckless lane changes without signaling and passed multiple semi-trucks utilizing the right-hand emergency lane.  The driver was also slowing and sometimes stopping in traffic for no apparent reason and drove into the median on more than one occasion.

As Trooper Ferguson attempted to keep the truck in sight, other troopers and officers from nearby agencies attempted to locate and catch up the vehicle.  At one point the truck was observed taking the Memphis exit and completely disregarding the stop sign at the bottom of the ramp before re-entering the interstate and continuing northbound at a high rate of speed.

Officers were able to catch up to the truck near Scottsburg, and a Scottsburg City Police unit initiated a pursuit; however, the truck soon entered the median near the 35 mile-marker where it overturned and crashed. 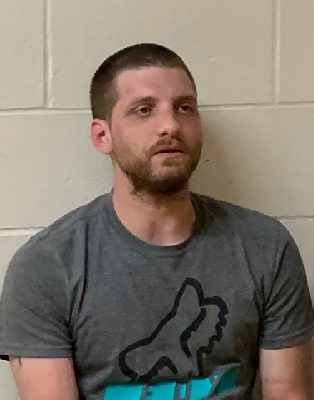 The driver was identified as Paul Clifton Barger Jr., 27, of Westport Indiana.   He is charged with Felony Resisting with a Vehicle - Level 5 Felony, Resisting Law Enforcement - A Misdemeanor, Possession of a Legend Drug - Level 6 Felony,  Operating While Intoxicated (OWI) - C Misdemeanor,  OWI Endangerment - A Misdemeanor, and Reckless Driving - A Misdemeanor.   Paul Barger was transported and remanded into the custody of the Scott County Jail.

The female passenger was treated and released from the scene and was not charged.