The Versailles Post trooper stopped a motorist for slowing traffic in the passing lane. 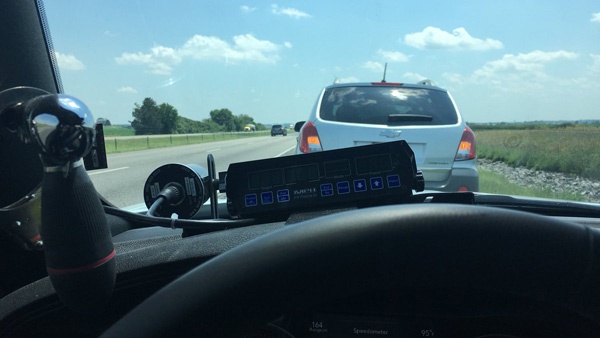 (Versailles, Ind.) - An Indiana State Police trooper at the Versailles Post has gone viral on the interwebs.

On Saturday, he tweeted a photo of a traffic stop he made on Interstate 65 because the driver was going too slow.

I stopped this vehicle today for a left lane violation on I-65. The driver had approximately 20 cars slowed behind her because she would not move back to the right lane.

Again...if there are vehicles behind you, you must move to the right lane to allow them to pass. pic.twitter.com/tePjJ1Xigy

In 2015, Indiana lawmakers passed a so-called "slowpoke" law allowing police to cite motorists who hold up faster traffic on interstates by refusing to move out of the passing lane.

Wheeles' tweet has received more than 14,000 retweets as of Monday. A number of Twitter users tweeted Wheeles reacting to ticketing drivers clogging up the passing lane. One of them was IndyCar driver Graham Rahal:

This guy is my hero. Fast lane cruisers are one of my biggest frustrations! 😂 @ISPVersailles nice work https://t.co/5ATh2dSlU6

Please nominate this man for a Nobel Prize. https://t.co/aeH7zslDV7

This is the most logical and common sense oriented comment I’ve ever heard from someone in law enfircement. Kudos to you sir. We need more cops like you

Left lane is for passing. You travel in the center or right lane