Sunday morning, an Indiana State Trooper suffered minor injuries when his vehicle was struck while on a traffic stop on US 421 south of Versailles, Indiana.

At approximately 9:45 am, Senior Trooper Kyle Black conducted a traffic stop on a 2002 Dodge Caravan being driven by Barbara Ann Matis, age 48, Madison, Indiana on US 421 Northbound near County Road 750 South in southern Ripley County. Trp. Black’s unmarked vehicle was positioned behind Matis’ vehicle on the shoulder of US 421 with his emergency lights activated.

A 2013 Chevrolet Traverse, being driven by Mary Ann Holman, age 77, Holton, Indiana was traveling northbound on US 421, approaching Trp. Black’s location. Holman’s vehicle collided with the rear of Trp. Black’s vehicle which was then pushed into Matis’ vehicle. 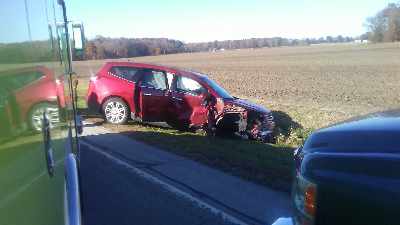 Debris from Holman’s vehicle struck Trp. Black, who was standing outside of his vehicle. Trp. Black sustained an injury to his leg. He was transported to Margaret Mary Hospital in Batesville, Indiana where he was treated and released. Holman was transported to King’s Daughters’ Hospital in Madison, Indiana to be treated for non-life threatening injuries. Matis complained of pain but declined to be transported for further medical treatment. 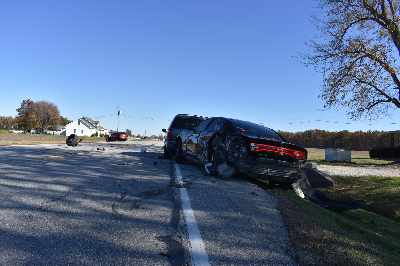